Historical Background of the Bodhi Tree

Buddha Gotama attained Enlightenment seated under a Pipal tree (Ficus religiosa) at Bodh Gaya. This tree is popularly known as the Bodhi Tree. The Bodhi Tree and the site are conserved as a holy Buddhist site, where the Maha Bodhi Temple now stands. Even during Buddha’s time, the Bodhi Tree at Bodh Gaya was reverenced by his devotees, and later King Asoka protected and built a shrine next to the tree, reverently referred to as the Sri Maha Bodhi Tree.

In 288 BC, during the 12th year of King Asoka’s reign, a branch of the Sri Maha Bodhi Tree from Bodh Gaya was brought by his daughter, Ven. Sanghamitta to Anurādhapura, Ceylon where it was planted by the Ceylonese King, Devanampiya Tissa. 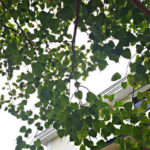 In April 1947, when Ven. Mahaweera started the construction of the Sri Lankaramaya temple, he was presented with the sapling of the Bodhi Tree from Anurādhapura by the first Prime Minister of Ceylon, Mr. D.S. Senanayake. When Mangala Vihara was constructed, Ven. Mahaweera took a sapling from the tree at Sri Lankaramaya, and entrusted it to the Lian family to nurture in their house garden. The Bodhi Tree was eventually planted in Mangala Vihara in 1962. Mdm. Boey Pek Yoke, a devoted helper, worked tirelessly for the welfare of Mangala Vihara during its formative years, taking great care in nuturing the plant.

Saplings from the Mangala Vihara Bodhi Tree were planted at Nanyang Technological University Buddhist Society in the mid-1980s in front of the Nanyang House within the Campus, Burmese Buddhist Temple and Samadhi Meditation Centre in Pontian, Johore.

The Bodhi Tree at Mangala Vihara is a lofty tree providing shade for pious devotees visiting the site to revere its greatness day and night. Members and devotees observe the Sanghamitta Day or Maha Bodhi Day there on December full moon day every year.

Sanhamitta Day honors the Arahant Ven. Sanghamitta (daughter of King Ashoka) for her travels to Sri Lanka to spread the Dhamma there and set-up the Bhikkhuni Order in Sri Lanka.  It occurs on the Full Moon day of December. She came to Sri Lanka with a sapling of the Bodhi Tree, the same tree that the Buddha attained enlightenment under.

On this day a lady member is nominated to represent Sanghamitta to carry a Bodhi sampling, leading a group of ladies in full white attire and go around  the temple three times.

A Naga Puspa Tree (also known as Dragon-flower, Mesua ferrea, the Sri Lankan ironwood, Indian rose chestnut, or cobra’s saffron) stands besides the Bodhi Tree in Mangala Vihara. The Naga Puspa is widely believed to be the chosen species of tree under which the future Buddha, Metteyya (Pali) or Maitreya (sanskrit) will gain enlightenment.